The JNG returned from a Midwest tour last month, during which we made debut appearances in NE and MO, and revisited IA and WI. We had a blast. The band consisted of the ever-dependable staple members, Adam Meckler and Evan Montgomery, and newbees Andrew Foreman (bass) and Zach Schmidt (drums). We set out in a rented, B-E-A-Uuuutiful, pimped out Chrysler Town and Country 2012. (Many thanks to Lois Elrod for helping us find the best deal on this amazing tour vehicle!)

Let me just pause to say that this thing had many fancy bells and whistles we very much appreciated, such as: wireless headphones accompanying a built-in, drop down DVD player, leather seats, stow away chairs/storage cubbies in the floor, fuel efficiency (26 miles to the gallon on the highway with 5 people and a full quintet worth of gear/luggage) and a smooooooth ride- felt like we were sailing down the road in a boat- an awesome boat. We liked it so much we looked up the current price of these beauts to adopt into the Meckler family as a permanent tour mobile, only to find they go for about 30K. Not gonna happen.

The VAN (And Andrew sporting my J-Lo shades, NBD)

We spent some long hours in that van, and with long hours comes BONDING. Strange things happen, such as poor Andrew Foreman bending over the driver wheel saying repeatedly, “Sooooo much rooooooad.” Many movies were watched, and much junk food was consumed.

The tour map began by setting out to Lincoln, NE, where we played to a very receptive crowd at the infamous Zoo Bar, and stayed with Adam’s family.

Adam and Jana at the Zoo Bar, Lincoln, NE

Adam’s sister, Elizabeth, welcomed us with this incredible lasagna feast. Mmmmmm. Also, our nephew Thomas is the cutest little dude ever. See pic of Adam and Thomas trading noses.

From NE, we headed to Sturgeon Bay, WI (What?! Yes, that’s what we did.) a 13 hour voyage including copious amounts of stopping. COPIOUS. I thought I’d take the award for having to stop and pee all the time, but I now know that  this high honor should really be bestowed to Mr. Montgomery.

Mr. Montgomery and the boys at an Iowa rest stop en route to Door County

In Sturgeon Bay, we played the Third Avenue Playhouse as a marquee-billed concert- again, warm and receptive crowd, and the band was starting to really sound tight. We really dug performing a concert, where the soul purpose is to come and listen, not listen, talk and drink. You know? You know. In “Sturg,” as we like to call it, we stayed with my generous folks, who cooked us some AMAZING food, and provided us with comfy accommodations and bonfires. 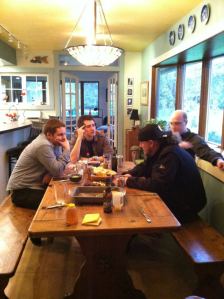 The boys at the infamous Nyberg table, where good eats HAPPEN

Concert day, the boys made a necessary venture up to “Not Licked Yet,” the must-stop custard place in Northern Door (Fish Creek ). I opted out of this coagulating treat to be able to sing…but I was envious.

We also made the necessary stop at the Red Room for some eats- super cheap burgers, curds, and beer.

The boys doing “the business”

Our name up in lights!

After a great show, we had a strange photo shoot with masks that I found in the $1 section at Target. I told the boys they were fired if they didn’t wear the masks. They happily obliged. 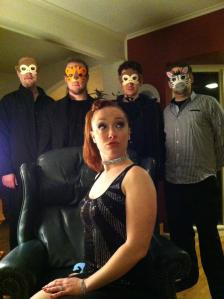 Don’t worry, I wore one too.

We  rested up and recharged for another long, loooonnnng drive to MO. We of course had to stop for food at some point (not to mention the 1,000s of other stops we made…) and happened upon the “World’s Largest Culver’s.” Yep! We were that lucky.

After we giggled at the fact that this Culver’s boasts a conference room in addition to their size, we ordered and sat down ready to devour some food. There’s something I should mention about Zach Schmidt before I tell you this next part of the story. Zach is a Twin fan. I mean, a TWINS FAN. He approaches our booth with this silly, mystified look on his face and whispers to our table, “I think that’s Tom Kelly in that booth over there!” When I was a kid, I was a major Twins geek (mostly, I was trying to be as cool as my older brother, Jake). The momentum the Twins had with the ’87 and ’91 Series made them very easy to like. I traded baseball cards, had a fitted Twins hat (super nerd) and played kickball and spit with the boys. Yep. So, upon hearing this alleged TK sighting, I told Zach I could confirm. I moseyed past the booth of these two older gentlemen as I nonchalantly went to “get a napkin.” On my way back to our booth, I suddenly found myself stopping at the table of TK and saying, “Either you’re Tom Kelly, or you look a hell of a lot like him.” He smiled and said, “Yep, that’s me!” The explained they had a TV spot the previous night, and were now headed to Beloit to watch the minors. We talked for a while- Jim Rantz was sitting there too with his two big bling’in Series rings, one on each hand. We discovered that we all lived in the same area when I was growing up. I quickly made sure we could grab some pics with them, and gave them “Fever” CDs. Zach was definitely star-struck, and appreciative that I opened my big mouth. 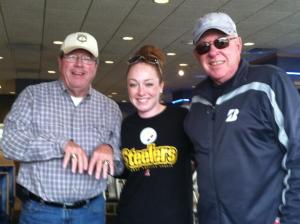 Tom Kelly, Jim Rantz, and Jana at “The World’s Largest Culver’s” …Jim looks a little silly as I asked him to show off his World Series bling… 😉 (Thought he would hold his hands UPward)

Onward! We were still en route to Hillsboro, MO when we started to lose our minds at a road stop. (Warning, the following picture is ridiculous.) 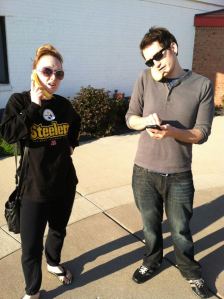 Andrew and Jana taking care of business from the road

We finally made it to Hillsboro- driving through St. Louis at night and seeing the Arch was pretty cool. We stayed with Joel Vanderheyden and his family, who is a musician friend of ours from the band KoPlant No, and is the professor who brought us down to do a clinic/concert at his school, Jefferson College. The college promoted us well, and gave us a very warm welcome! 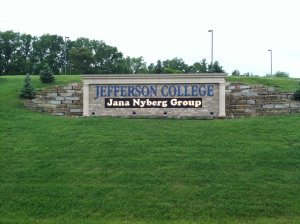 I can’t tell you how much we enjoyed the clinic- working with students who are passionate about music is a blast. Many of them attended the concert that night, which went super well- the band was really starting to gel. Great times, we’d love to go back there! Following is a ridiculous pic from the green room pre-show. I can’t tell you how much I love Adam’s expression, like, “I really shouldn’t be looking at this behind that’s in my face.”

Just one last stop for this motley crew! Alas, the morning after this concert was the roughest, nearing the end of the tour, sleep-deprived, and departing by 5:30am to make it to Davenport, IA for a noon show. To make things even crazier, Evan, Andrew, Zach, and our host, Joel, ventured into St. Louis post-concert to see Zach’s cousin perform. So, they slept 1.5 hours, and Adam and I slept about 4.5- meaning we were the drivers 😉

When we arrived into Davenport, we found ourselves in a cloud of awesome (aka: delirious sleep deprivation). We played the River Music Experience to a fun crowd, and were really happy that Adam’s brother, Jon, and fiancée Leann could make the trip to see us. We also got to see Drew Morton and Brian Lewis Smith (also of Koplant No) and some other cool cats. This venue is really cool-  I recommend checking it out sometime.

Final tour performance with this band of great bandits

This final day of tour was also Zach’s birthday! We had to celebrate in style, which meant getting some icecream at Iowa’s famous “Whitey’s.” Here’s a picture of awesome:

As you can imagine, fits of unexplained giggles and other such ridicularities (…yep, I made up that word…) occurred on the way home. Sooooo much rooooaad! We were somewhere near Rochester when Andrew and I came upon these gems at a rest stop: 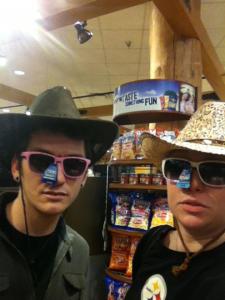 And we actually made it home! All boys were dropped off by 10:30p, and Adam and I returned home as fast as possible so we could get up in the morning to adopt this awesome little guy from Tennessee, “Buster Jones” (I know, we’re nuts).

The one and only Buster Jones

Since the road, the band had a “toureunion” as I like to call it, where Adam and I hosted a cook out on the Carleton rooftop. You know band mates are awesome when you want to see them as soon as possible after spending a week of such concentrated time together on the road.

All in all, a success. Next time, we’ll try to book shows a little bit closer together, to make travel easier, but other than that, perfection. Thanks for reflecting with me! Until next time, Jana Banana signing off.

This entry was posted in Banana Lady. Bookmark the permalink.

One response to “Midwest Tour Reflection”