We’ve been composing a lot lately! There is bound to be another album much sooner than later. I know, we just can’t stop! This is what happens when you are surrounded by excellent music/musicians 24/7. I am spoiled. It’s true. Well, SOMEone had to come out and say it!

More after the jump!I have come to the realization that much of the Jana Nyberg Group sound comes from the one and only Evan Montgomery- an original member, he’s been with us since the beginning- 6 years ago, when we all came together at Lawrence Music Conservatory, Appleton, WI. When we started out, we were “The Jana Nyberg Trio,”  and Evan played the difficult role of guitar/bass to support the trumpet and vocals sans-full rhythm section. This really built up Montgomery’s chops, and now he can do ANYTHING. His harmonic instincts are so incredible and innovative, the music becomes tastier by the minute. Also, he’s just a dandy guy to have around. 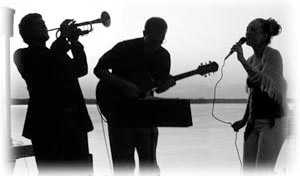 Our arrangements naturally evolved from 3 summers of playing 4-5 hits a week in the touristy wonderland of Door County, WI. When you play together that much, AND rehearse, things happen! Adam Meckler, trumpet, is also an original JNG member, and another prime staple of our sound. He fits the sweet sounds of his trumpet into any genre, be it jazz, pop, or a hard rock/blues. The new album, “Fever,” highlights Meckler’s versatility fabulously. He plays many roles in the group- trumpet, flugel horn, aux. percussion, background/sometimes lead vocals…and my husband. He’s pretty cool.

We’ve had a number of drummers based on location and availability, but MAN have we been spoiled with them! When the trio decided to expand, Jake Nyberg, my one and only brother, came on the scene for the summer Door County gigs. He added some serious spice to our repertoire, and played on our first album as well. Jake has this gift of playing in any style and making it sound natural, creative, and complimentary to the bigger picture. He is the reason that we brought Bonnie Raitt’s classic, “I Can’t Make You Love Me” into the picture with our newest album, “Fever.” Nyberg devised a chill drum-and-bass beat as a static bed, creating a sound uniquely our own. He guests on this track, definitely check it out!

Jake is BUSY. If you know Jake, you know he is a social media guru, a beloved Twerson (I made that up- but you know, Twitter…) has his own film production company with which he travels the country and world, is an avid Twins fan, trivia and karaoke fanatic, runner, drummer in multiple bands including The Sextons, Subdivider, The Jana Nyberg Group, and The John Richardson Duo. So, he’s busy. When we realized we couldn’t always pin Jake onto our bills, we branched out. Here enters Derek Dreier.

Derek is featured on the new “Fever” album, and does a smashing job. (No pun intended.) Derek brings a sensitivity to the music, sometimes even laying out for a chorus, creating cool contrasts. I cannot even begin to explain to you the epic awesomeness he formulated for one of our originals, “Inside a Bottle.” Drummers, just try to transcribe what he did there- I double-dog-dare ‘ya 😉 Derek’s attention to detail and classical/jazz background bring new flavors to the table that we all dig…a lot. Case in point, take a listen to the intro on the song, “Emily,” featuring Derek with mallets. Thus shines through Derek’s Masters work on Timpani. I know, right?! He’s a stellar guy.

When Jake AND Derek are both not available, we have yet ANOTHER drummer we love! The infamous Greg Schutte. Man, this guy is kill’in! We’re so glad that he joined in the fun. Greg brings his own pizazz, and if you’ve ever heard him on a gig, you KNOW. He can bring it in any style, ANY, and sound like a natural pro. His beat is nice and tight in the pocket, and you can count on his creativity making a gig a complete blast. He listens like crazy, and he is just a super cool dude.

And last but certainly not least, we decided to expand even MORE, thus the ever-dependable Matt Peterson entering the picture. Matt is THE bassist. He is known to always be timely, super pleasant, and a tight player. Those bass lines are always walking smooth and sitt’in back real nice. Peterson solos delicious lines and keeps beautifully steady time. When Matt isn’t playing the bass, he enjoys cooking, snuggling, and long walks on the beach.

So, let me book-end this entry properly in college-writing class style, and repeat: I am spoiled. Not a day goes by I take these dudes for granted. They’re…INCREDIBLE! They are the reason I love what I do, so much. I’ll stop bragging about my awesome band boys now, but, if you still don’t believe me, come out and see a show soon!

Thanks for reading, my fabulous JNG-ers, we love you!

This entry was posted in Uncategorized. Bookmark the permalink.